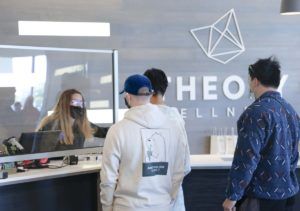 It was a big week in the marijuana industry as Vermont legalized a recreational market and Maine began adult-use sales (pictured). (Photo courtesy of Theory Wellness)

Vermont became the 11th state in the U.S. to fully legalize marijuana for adult use when Republican Gov. Phil Scott let a bill to allow recreational sales become law without his signature.

MJBizDaily takeaway: Setting aside the governor’s half-hearted support, the cannabis industry can be content that Scott didn’t veto the bill the way former Maine Gov. Paul LePage did repeatedly after voters approved recreational marijuana in 2016.

This makes Vermont the latest domino to fall in the decades-long fight to allow legal recreational marijuana sales – following Vermont’s legalization of possession and use in 2018.

And its possible more northeastern states, including New Jersey, will soon follow suit.

MJBizDaily takeaway: Maine has emerged as a cautionary tale for marijuana industry advocates. The moral of the story? A popular vote doesn’t ensure success.

The formula for a well-structured cannabis market that allows businesses to thrive also needs supportive public officials, or at least a government that won’t act as a barrier along the lines of former Gov. LePage.

That’s something industry insiders should consider as legalization efforts expand nationwide, potentially in conservative states – think Mississippi, Montana and South Dakota, which all have marijuana on the ballot in November.

Uphill battle for WHO cannabis recommendations

MJBizDaily takeaway: The current scenario shows it is unlikely that the CND will approve all the recommendations in December.

Businesses expecting a positive result should brace for at least a partially negative outcome. Some recommendations have a higher chance of approval than others.

An Arizona CBD company is accused of bilking investors of millions of dollars and getting an emergency loan through the U.S. Paycheck Protection Program (PPP) while the business owners used the money to buy a private jet and fund other lavish expenses.

Disgruntled investors made the accusation against Integrated CBD in a lawsuit that says the company had laid off all its employees months before it secured as much as $350,000 through the PPP program.

The executives have not been charged with criminal fraud. But the allegations underscore the fact that even if government auditors don’t come digging, investors expect companies to follow the rules in times of crisis.

One of the newest medical marijuana markets in the U.S. – which is still a ways off from launching – took a significant step forward when officials awarded the first 10 cultivation licenses to companies.

MJBizDaily takeaway: West Virginia is another cautionary tale, given that the state Legislature legalized medical marijuana more than three years ago. And the state still has scores more licenses to award, including for retailers.

The situation again underscores the importance of buy-in from local officials, akin to the situation in Maine.

But in West Virginia’s case, it was an anti-cannabis federal prosecutor who was able to gum up the market’s launch by scaring off local banking institutions from working with any cannabis companies – or the state’s MMJ program.

Cannabis flower grown in Uruguay became available to patients in Germany for the first time. Tilray Germany is selling the products to German pharmacies via its European Union-Good Manufacturing Practice (EU-GMP)-certified facility in Portugal.

MJBizDaily takeaway: This situation sheds light on the question of what happened with the huge Uruguayan exports to Portugal in 2019 and earlier this year.

Moreover, the news is proof that flower not harvested in an EU-GMP-certified facility can be sold to patients in Germany under certain circumstances.

MJBizDaily takeaway: It might be tempting for some operators to make a quick profit by selling cannabis on the illegal market.

But this case underscores that it’s not worth the risk if a company wants to be in the industry for the long haul.

MJBizDaily takeaway: The immense haul of illegal plants is another reminder of the size and scope of California’s illicit cannabis industry, which remains one of the biggest impediments to the success of state-legal MJ companies.

As long as prohibition exists in large swaths of the U.S., illicit operators will be willing to ignore the rule of law for the sake of profit.

These types of busts will almost certainly continue.

John Schroyer can be reached at [email protected]