We’ve steamrolled through the first month of 2021 and if you’ve been following my blog posts, you may be aware of the fact I’ve been growing some “winter balcony bud”. That’s because here where I live, winter is really not that cold.

There’s a couple of cold snaps, but mostly, the weather is perfect for growing weed. In the summers it gets hot, and the complications from the heat makes it harder to crop out during this season.

Nonetheless, I cropped one of my plants that gave me a little over an ounce and a half. Not bad considering that all I invested in growing the bud was;

1/3rd Coconut Substrate [at the bottom of the pot]

This was the second balcony bud I harvested, the first plant unfortunately was harvested way too early, so the harvest was not even 8 grams. But these setbacks is how you perfect your game.

Nonetheless, the experience of growing the winter balcony bud made me re-evaluate what you’d need to grow to have a never-ending cycle of weed. This is an updated version of an article I wrote years back where I wrote about crop-cycle and how to optimize them for a constant yield.

How many plants would you need for an endless personal supply of weed?

Knowing how much you actually consume is a key element to knowing how much weed to grow. Taking the 1 and a half ounce I grew from my latest balcony bud, 1 plant would technically be enough for me per month to get by.

But you don’t want to get by, and so I speculate that at least 2 plants per month is required for you to have an abundance of weed.

The first step would be to figure out how much you smoke, and then simply double that amount to know how much you need to grow.

In my case, I smoke a bit more than an ounce a month, so 2 ounces would be more than enough for me and to graciously share with my inner circle.

Now that we know we need to crop out 2 plants per month, we need to build up the momentum. To do this, we’re going to be sprouting 4 seeds every month until our first harvest.

Considering that the total time it takes the average cannabis plant to be ready for harvest from seed is anywhere between 120-150 days. You still need to consider at least another 30 days for proper drying and curing.

This gives us roughly 180 days from Seed to Smoke. Knowing this, we’ll be growing 4 plants per month for 6-months. Don’t worry if you think that this will be too much because in all likeliness – unless you’re buying autoflower and feminized seeds, you’ll probably get a few hermies and males.

We grow 4 plants because odds are we’re eliminating 2 of them anyhow. Perhaps because they are males, or perhaps they simply aren’t growing as good as the others in the batch.

One thing that is critical however is that you keep track of which plants were planted when. Mark it down in a book or in an excel sheet so you can understand how much you are producing, investing etc. The true cost of operation and the true yield.

Isn’t that a lot of plants?

Yes, kind of. I mean, when it’s all said and done – you’d grow 24 plants in 6 months which is way over the limit of most places. But since you’re going to be doing them with a month separation between the crops, you’re eventually only going to be left with 12 plants.

Roughly by day 80-90, the plant will begin transitioning into the flowering stage [unless autoflower which may start sooner]. Ideally, you’d like to have two locations for growing.

I currently have 8 plants at different stages on my balcony. I just harvested one plant maybe a month ago, my second plant will probably be harvested by the end of February. Then I have a third plant that is just starting to flower.

The good thing is that up until late in the flowering stage, it really doesn’t smell. If you plant enough other plants in your garden, they go pretty unseen by prying eyes.

The most ‘dangerous’ part of growing is during the flowering stage – when things will get stinky. However, since you’re only really ever going to have at most 6 plants in flowering, with a month difference, there will be 2 plants that really stink, 2 that don’t stink that much and 2 that are just flowering.

While you’ll have 3 pairs of other plants with a month separation between the vegetative stage.

Really, you only have to deal with 2 stinkers each month. I recommend having a “Fruiting Chamber” or a space away from the other plants as to not accumulate a pungent odor – which to my nose smells like heaven but to a cop – like a payday.

At the end of 360 days, you would have gone through 48 plants, but only kept 24. But by the end of the year, each month you’d have roughly 60 grams of bud of fresh amazing bud for you to smoke. Not to mention all the hash and kief you can get from the sugar leaf.

WHY GROW YOU OWN WEED, READ MORE… 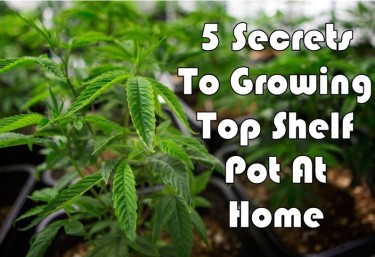 TOP SHELF WEED AT HOME, HERE ARE SOME TIPS!