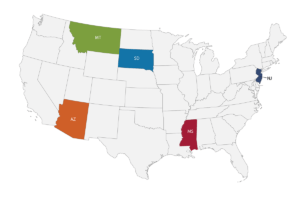 Voters in five states will decide whether to legalize medical and recreational marijuana in November, with billions of dollars in new business opportunities hanging in the balance.

The ballot measures also promise to have regional ripple effects from the East Coast and Deep South to the heartland and Mountain West.

Not a bad turnout for a year in which even more initiatives were expected to qualify for the November ballot, but some were derailed by the coronavirus pandemic and other factors.

Below, you’ll find detailed snapshots for each of the five states, including what’s on the ballot as well as the outlook for passage.

If approved by voters in November, Arizona’s commercial adult-use marijuana program is expected to generate up to $760 million in sales in 2024.

Arizona cannabis attorney Janet Jackim recently said in-state and out-of-state marijuana companies and investors “are trying to gobble up any (MMJ) licenses they can.”

Those acquisitions would pay off if the ballot measure is successful, because Arizona’s industry-backed recreational marijuana initiative overwhelmingly favors existing MMJ operators.

Arizona-based Harvest Health & Recreation and Massachusetts-based Curaleaf bankrolled the Smart and Safe ballot initiative and are poised to be big winners if it passes.

Harvest already has the largest retail presence in the state with 15 dispensaries supported by four cultivation sites and two processing facilities.

Harvest CEO Steve White told analysts during an earnings call in August that the company is expanding its cultivation and processing capacity in preparation for adult-use marijuana legalization.

“You’re not going to see what you saw in Illinois, where people are running out of product,” White said.

Voters narrowly defeated an adult-use measure in 2016, but support for legalizing recreational marijuana keeps increasing, so the industry is optimistic the initiative will pass this time around.

Likelihood of passage: 51% of registered voters said they would vote for the initiative while 41% would vote against it, according to a poll conducted in September by Monmouth University.

* Figures are for Initiative 65 only.

Mississippi medical marijuana industry advocates hope their state will be the second in the Deep South to legalize MMJ.

A strong vote of support, industry experts say, also could influence neighboring states such as Alabama, which has yet to legalize MMJ. But legalization advocates in Mississippi face a battle because of a restrictive competing initiative that triggers a tougher voting threshold for passage.

Citizen advocates put forth a business-friendly measure (Initiative 65) in this conservative state, but then lawmakers countered with a measure that is largely undefined but would limit licenses and allow just terminally ill patients to smoke medical marijuana (Initiative 65A).

With competing measures on the ballot, voters will be asked two questions: Whether MMJ should be legalized and, if so, which initiative the voter favors.

An initiative must receive at least 40% of all votes to pass, according to the state’s election rules. In other words, a strong majority will need to answer yes to the first question about legalizing medical marijuana and then clearly support one initiative over another.

Details of the citizen initiative:

Likelihood of passage: It could be close. A recent survey by California-based political polling firm FM3 Research found that the citizen measure could have just enough support to pass. The poll, funded by the group behind the citizen initiative, showed that 81% of Mississippians favor doctors being able to recommend medical marijuana and 52% favor the citizen initiative.

Montana would join Colorado and Nevada in legalizing recreational marijuana in the Mountain West if residents vote to pass a commercial adult-use initiative in November.

The initiative would allow existing medical marijuana operators first entry for a year.

Local jurisdictions could vote to opt out of recreational marijuana, so it’s unclear how robust of a market the state would have—at least initially.

The state’s MMJ market is expected to reach $60 million-$75 million in revenues this year, according to the Marijuana Business Factbook.

A recent poll showed a slim majority of residents favor adult-use marijuana legalization, with about 10% of survey respondents still undecided.

Likelihood of passage: In this moderately conservative state, residents supported recreational marijuana legalization by a margin of 54% to 37%, with 10% undecided, according to a University of Montana Big Sky poll published in February 2020.

New Jersey residents are being asked to legalize a commercial recreational marijuana program in November that promises eventually to become a multibillion-dollar business—one that could spur neighboring states to follow suit.

The sparsely worded initiative lacks details such as how many business licenses would be made available. Those laws and regulations would be hammered out later by state lawmakers and cannabis regulators if the measure is successful with voters.

Scott Rudder, president of the New Jersey CannaBusiness Association, is among those who believe current medical marijuana operators would get first crack at the adult-use market in order to accelerate a market launch that could occur by late 2021.

Rudder predicts a “level of urgency” for lawmakers to pass the ensuing legislation and for regulators to establish the rules because of pressure to generate economic opportunities and tax revenues in wake of the coronavirus pandemic.

Bridget Hill-Zayat, a cannabis attorney with Hoban Law Group who is licensed to practice in New Jersey, agreed. “If the motivation is a drive for tax revenues, they are going to want to move as quickly as possible,” she said.

With racial justice even more of an issue in recent months, Hill-Zayat said New Jersey might issue micro-licenses and loan programs to encourage applicants from diverse backgrounds to apply.

Municipalities, which could levy up to a 2% retail tax on adult-use marijuana products, also might be more motivated to opt-in to recreational marijuana, given their own budget pressures, Rudder said.

Experts expect the ballot initiative to pass, noting that the latest polls show roughly two-thirds of New Jersey residents in favor of the initiative.

If New Jersey Public Question 1 is successful at the ballot box, Rob DiPisa, partner and co-chair of cannabis law group Cole Schotz in Hackensack, New Jersey, predicts a market launch in the second half of 2021, given the likelihood of existing MMJ operators to be fast-tracked for adult use.

Sponsor: A supermajority of New Jersey lawmakers passed a measure that put the referendum to legalize an
adult-use marijuana program before voters in November.

Tax rate: 6.625% sales tax on adult-use products. Municipalities could pass ordinances to charge local taxes of up to 2%.

Likelihood of passage: Residents favor the legalization proposal by a margin of 68% in favor and 26% against with 6% unsure, according to a July poll commissioned by the cannabis law practice of Brach Eichler and conducted by DKC Analytics. An April poll conducted by Monmouth University found 61% of respondents in favor of adult-use legalization.

* Figures are for medical marijuana only

South Dakota could become the first state in the nation to simultaneously legalize medical (Measure 26) and adult-use marijuana (Amendment A) in November.

That would be a milestone for the politically conservative state, especially considering that MMJ supporters weren’t able to collect enough signatures to get a legalization initiative on the ballot in 2018.

Initiative: Legalize a recreational marijuana market through a constitutional amendment.

NEXT: The Domino Effect