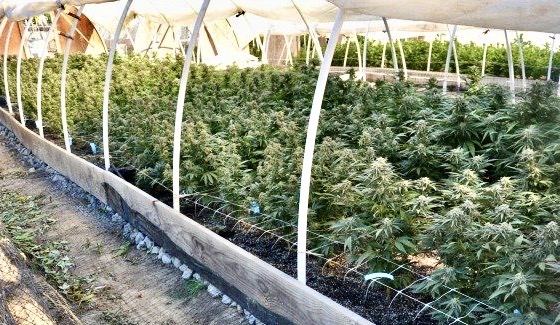 In the latest episode of Humboldt Last Week

Recently there was a marijuana bust in SoHum where the growers apparently had county permits but no state license. This was along Little Buck Mountain Road east of Garberville including almost a dozen-thousand plants, over two tons of processed bud, guns, and alleged environmental violations. The news caused many to ask: What actions were taken to give these farmers a chance to become compliant before the bust occurred?

I heard back from the California Department of Food and Agriculture. In summary, they stated while the farmers initially claimed a well was the source of their water, in May the state learned a pond was their water source. The state then looked into whether the farmers were in process of permitting the pond. The farmers were not and were also allegedly violating a cleanup and abatement order from the water board. The farmers then got a notice in June that they had 30 days to permit the pond, or else. They didn’t, and the farmers apparently then proceeded to keep growing cannabis after getting a bunch of licenses suspended. That’s what they say led to the big bust on October 21.

Full statement from the California Department of Food and Agriculture:

On October 21, 2020, a cannabis farmer located on Little Buck Mountain Road in Humboldt County who previously had been licensed by the California Department of Food and Agriculture (CDFA) for commercial cannabis cultivation was served with a search warrant by the Humboldt County Sheriff’s Marijuana Enforcement Team. The farmer had indicated in the cannabis cultivation license application submitted to CDFA that a well would be the sole source of water used to irrigate the cannabis. A CDFA compliance inspection conducted on May 5, 2020, revealed that a pond was the main source of water used for cannabis cultivation, not the well indicated in the license application. When CDFA staff followed-up with the California State Water Resources Control Board and the California Department of Fish and Wildlife to determine the permit status of the pond, they learned the licensee was not in the process of getting the permits required to use the pond for cannabis irrigation and was also in violation of a Cleanup and Abatement Order that had been issued last year by the North Coast Regional Water Quality Control Board.

As a follow-up to the CDFA inspection, the licensee received a Notice of Violation for each of the three licensed premises on June 22, 2020, stating the pond could not be used for cannabis irrigation until a permit was received and provided 30 days for the licensee to submit the permit. The licensee did not comply with this directive within the 30 days provided, nor did the licensee comply once the three provisional cannabis cultivation licenses that were in effect as of July 23, 2020, were suspended. The three provisional cannabis cultivation licenses issued by CDFA were then revoked on August 26, 2020, for the violations noticed in the June 2020 violation notices and the July 2020 suspension notices.

An interview with Trevor Dunn of Mr. Bungle, a major honor for a local teacher, Tom Brady praises a former Arcatan, Guy Fieri somehow made political news, Taj Mahal is helping Del Norte, prescribed burns, a thumbs down from the ACLU, more details from the state about an interesting recent cannabis bust in SoHum, and more.