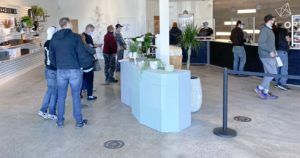 Theory Wellness in South Portland, Maine, experienced a good turnout on the opening day of recreational marijuana sales in the state. (Photo courtesy of Theory Wellness)

Maine became the 10th state to launch legal recreational marijuana sales on Friday, when socially distanced shoppers lined up at a handful of new cannabis retailers.

A former anti-marijuana governor and the coronavirus pandemic slowed the rollout of the East Coast’s second adult-use market.

Brandon Pollock, CEO of Massachusetts-based Theory Wellness, said the company’s new store in South Portland, Maine, had at least 80 customers lined up outside when the retailer opened at 10 a.m. ET.

Selection was limited to, before tax:

“And that’s it, at the moment,” Pollock said.

In Northport, Sweet Relief Shop owner John Lorenz is still waiting for his adult-use cultivation license to be finalized.

Lorenz said he had arranged a supply deal that collapsed on short notice, leaving him unsure whether he’d have any cannabis to sell at his licensed recreational store on Friday.

“The day it was supposed to be delivered (the supplier) got a phone call, someone offered them $4,500 a pound, I’m told.

“They threw our deal and relationship in the trash; they wouldn’t even bring down a half a pound for me the other day.”

Lorenz said he managed to find another grower at the last minute who supplied him with two types of pre-rolls late Thursday, allowing him to open Friday morning with a limited selection. He was selling the 0.75-gram joints for $15 apiece.

“When they’re gone, I don’t know who or where I will be resupplied (from), whether it will be in weeks or months,” he said.

The supply situation was better at Firestorm in Bangor, according to owner Mohammed Ibrahem.

He and his business partner took advantage of their active cultivation license to supply their store with nine varieties of flower ($60 or $65 for 3.5 grams), six types of pre-rolls and concentrates such as vape cartridges and batter.

“We had a very long, very robust, happy line of people who were very excited to get in here and exercise their new freedom … It was just wonderful, and it’s been packed ever since,” Ibrahem said.

Competing Maine retailers without an active cultivation license to supply themselves are currently facing “a difficult situation,” he added.

“Because you reach out to grows like ourselves looking for product, when all our product is earmarked for our stores that are vertically integrated.”

In the town of Damariscotta, licensed retailer Coastal Cannabis Co. had no choice but to sit on the sidelines on Friday.

“We were unable to open because there’s no product available,” co-owner Dave Page said.

Page said his business partner’s cultivation license was granted final approval on Thursday, and he expects it will take at least three weeks to source flower from that grow.

Meanwhile, Page said he couldn’t secure a supply of edibles or concentrates from licensed manufacturers, and he heard wholesale flower prices were “unbelievable.”

“We’re not going to open until we can open with a bang, you know?” Page said.

“I don’t want to open with just flower or just edibles or just concentrates – I want to have everything, and I want to be ready to do business.”

The supply challenges outlined Friday by Maine cannabis retailers might take some time to resolve.

Matt Bayliss, founder and cultivation director of licensed cultivator Gele in South Portland, managed to transfer a mature crop from his medical license to his recreational permit just in time to harvest it and sell it into the adult-use market.

Ninety percent of that harvest was snapped up by a single retailer, commanding a wholesale price upwards of $4,000 per pound, Bayliss said Thursday.

“There’s already a flower shortage in the state as far as (medical) goes,” he said.

“With adult use … it’s going to take quite some time – I think we’re looking at, who knows, six to 18 months of having supply issues when it comes to flower.”

“And we got shellacked on that this year. Who knows what’s going to happen next year? … I think a lot of (medical) operators that have always planned on switching over (to recreational) are probably pulling back on the reins a bit.”

“Pretty much every other state that launches this new program, prices tend to be high and supply tends to be a challenge until the supply chain and the market starts to work itself out,” Gundersen told Marijuana Business Daily on Thursday.

The added complexity of COVID-19 might be making it harder for product to move through the system, he added.

“But I’m sure in due time it’ll work itself out, and we fully intend for the industry to grow and stabilize.”

Gundersen said the OMP plans to make retail price data available to the public in the future.

The OMP started issuing final licenses in September, leaving licensed businesses with a short window to prepare for the launch.

“Knowing that we’ll have the distinction of being the only state to launch during the health pandemic, I think people have an understanding (that) it’s not going to look anything like what we may have envisioned pre-COVID,” Gundersen said.

The OMP is still issuing adult-use licenses on a rolling basis through a three-step licensing process, which requires first obtaining a conditional license from the regulator, then local approval from a host municipality and, lastly, returning to the OMP for final licensing.

Many more businesses are waiting for their chance to enter the market: The OMP reported 433 applicants in various stages of the adult-use licensing process as of Thursday, along with 21 active recreational licenses, including eight cultivators, eight retailers, four manufacturers and one testing lab.

Solomon Israel can be reached at [email protected]