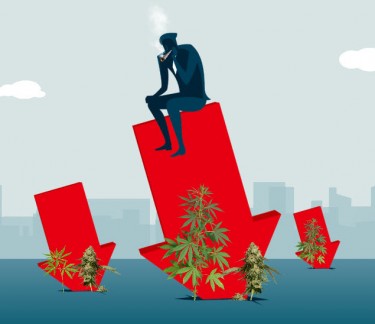 The cannabis industry has survived different types of raging storms over the course of its lengthy history. Despite its use in different cultures around the world, the industry was faced with the tremendous war on drugs that deeply changed the perspective of many. With the scheduling of cannabis as a Schedule 1 narcotic, many saw cannabis as a hard drug and less of a natural herb. However, despite all these adversities, the industry prevailed and it continues to grow stronger each year. In this article, I’ll be drilling down on why the majority of experts believe that cannabis is a recession-proof industry.

A period of recession is one that badly hits various arms of the commercial sector. Different businesses and stakeholders are bound to incur some degree of losses as the economy restructures with the new changes. Such was the case during the 2008 recession which saw many industries collapse. An example of a sector that was badly hit in the 2008 recession is the real estate sector and some parts have still not recovered from the effects.

The COVID-19 pandemic also created such a kind of situation when it hit the world in the year 2020. With businesses and governments on lockdown, it gave a sort of preamble to what is to be expected from another global recession. However, as some industries crumbled and suffered greatly, some rose up and even thrived during such uncertain times. The cannabis industry is one of those industries that seemed to thrive during such economic uncertainties. This is why the cannabis industry has been pegged as a recession-proof industry with many factors working in its favor.

Here are 5 major reasons why legal cannabis is a recession-proof industry.

Increase in the number of open markets.

One of the major if not the major limiting factor of the cannabis industry is the scheduling of cannabis as a Schedule 1 narcotic. This has made the beneficial medical herb illegal and has promoted the criminalization of different practices that involve cannabis. Fortunately for the cannabis industry, many states are not in agreement with this stance and have since put forward their laws. The US has over 33 legal markets for medical use of cannabis and 10 markets for recreational use. These numbers are bound to go higher as more states are moving to legalize marijuana.

The opening of more markets brings in more stakeholders and players into the industry thereby helping to solidify the industry. With the increasing demand for cannabis products and expanding infrastructure for supply, the industry is in the right place to survive a recession.

More doctors are open to the medicinal applications

Medical marijuana is applied for relief from pain, inflammation, anxiety, nausea, and seizure. Medical marijuana is growing because more doctors are willing to prescribe marijuana to their patients. This makes the industry well-positioned to handle the issues of recession.

Vices do well during economic uncertainties

Periods of economic uncertainties such as global recession tends to increase the stress levels of many in the commercial sector. The feeling of insecurity is further enhanced by the changing tides which eventually push many to find solace through different means. The 2008 recession showed that vices do well in tough times as alcohol consumption skyrocketed and improved in sales. Though not necessarily a vice, cannabis can fit in this category because many recreational users take it to stay clear of worries.

Cannabis has been used by many to find calm and relaxation and a recession period will not be so different. Sales in cannabis products skyrocketed during the COVID-19 pandemic because many used it to find solace during such trying times. This reality means that during a recession period, the cannabis industry is sure to stand on its feet as different people will rely more on its products.

The year 2020 saw the presidential elections which brought in Joe Biden who is known by many to be in favor of cannabis legalization. This reality means that there may be better ahead for the cannabis industry in terms of regulations but it doesn’t end there. Research by the Pew Research Center shows that 62% of Americans are in support of legal marijuana markets and a 2018 Gallup poll shows major Republicans in support as well. This growing bipartisan support is good for the cannabis industry and puts it in the right frame to handle the effects of a recession.

Former Republican Speaker John Boehner is one of the outspoken supporters of cannabis. He now sits on the board of advisors for Acreage Holdings as he advocates for legalization and supports cannabis businesses.

Even though many want the present situation of laws and regulations in the cannabis industry to change, the present state of things also has its benefits. With state laws and federal laws being different, it is very hard to understand the lines between the laws. Issues such as traveling with weed between legal and illegal states have also been a recurring issue. However, this creates room for the industry to adapt and restructure to become more solidified.

Cannabis laws are bound to take time to change and this period will allow the cannabis industry to grow sufficiently. The added time gives the industry time to be able to put in place infrastructure to be able to meet the demand of customers and supply sufficiently. Google searches suggest the illegal cannabis market could grow by 450% during a prolonged recession.

CAN CANNABIS STABLIZES US FROM A DEEP COVID-19 RECESSION? 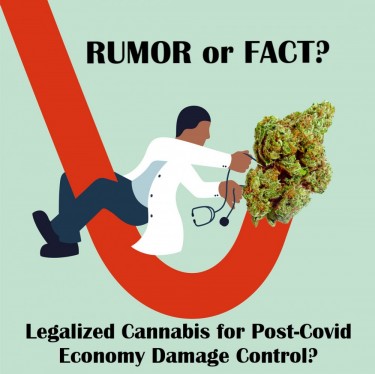 LEGALIZED MARIJUANA WILL BE DAMAGE CONTROL FOR THIS RECESSION?