You’re reading a copy of this week’s edition of the New Cannabis Ventures weekly newsletter, which we have been publishing since October 2015. The newsletter includes unique insight to help our readers stay ahead of the curve as well as links to the week’s most important news.

On Friday, Tilray stock traded $2 billion in shares, one of the highest single-day dollar volumes we have ever observed in the cannabis sector. To put things in perspective, the stock currently has a market cap of $2.6 billion based on the shares outstanding. Volumes across all cannabis stocks have exploded in general in this rally, reflecting growing demand ever since the Democrats gained control of the Senate, but 77% turnover in Tilray shares (even higher when considering the float) is rather extreme. Clearly, traders chasing higher prices and not investors are calling the shots in this stock, and we think the traders are making a $800 million mistake.

In December, Tilray agreed to merge with Aphria. While Aphria is acquiring Tilray, Tilray will be the surviving company. Specifically, each share of Aphria will be converted into 0.8381 shares of Tilray. Tilray shot up on the news of the deal on the first day, reflecting the premium it is receiving. On 12/15, the day before the deal was announced, Aphria closed at $8.12, and Tilray closed at $7.87. Since then, Tilray has substantially outperformed Aphria: 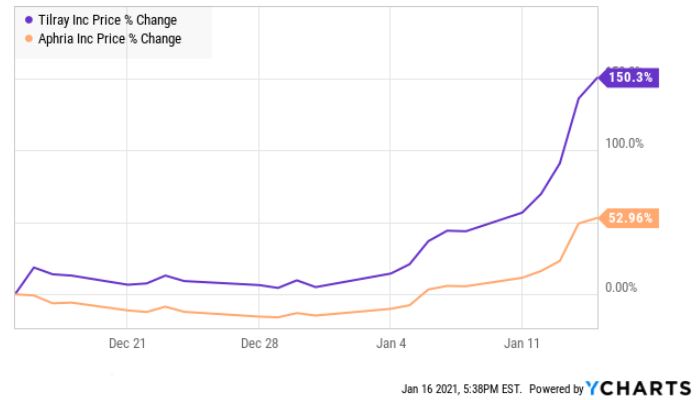 At the closing prices of $19.70 for Tilray and $12.42 for Aphria, Aphria is trading at .6305 times the price of Tilray, far below the .8381 exchange ratio. We have been watching the ratio deteriorate steadily since the deal was announced and are shocked. Rather than Aphria trading at a discount to the ratio, it should be trading at a premium in our view, as Tilray is the company being acquired and at most risk if the deal weren’t to close as expected in late Q1 or early Q2.

We reached out in December to Aphria to better understand why the market was placing a premium to the merger transaction, and the company couldn’t explain it. An analyst asked on Aphria’s earnings call this week as well, but there is no clear explanation. We believe that there are some theoretical possibilities that might explain this situation, including another buyer of Tilray stepping in or Aphria being willing to pay more, but both of these seem implausible. The real reason, in our view, is market inefficiency, as it is expensive to short Tilray into the close. We expect that once the traders move on, investors will realize $800 million dollars will have been left on the table.

In other words, you can get 32.9% more for your shares effectively by selling today and replacing with Aphria stock than by holding until the closing.

There are 162.4 million shares and in-the-money warrants and options for Tilray. Multiplied by $4.88 per share, this discrepancy is worth $792 million.

Traders could certainly push this relationship even further beyond the irrational levels today, and there are the unlikely events of a higher bid for Tilray from Aphria or another company. Of course, if the merger fails, the sale of Tilray and purchase of Aphria would likely work out even better than expected. To us, this seems like a great way to exploit the exuberance of traders.

KushCo Holdings, a premier provider of ancillary products and services to the legal cannabis and CBD industries, recently reported $26.8 million revenue and positive adjusted EBITDA for the second consecutive quarter in fiscal Q1 2021. The company has shown that doubling down on its efforts to expand its business with leading MSOs and LPs is paying off. KushCo has increased its year-end guidance as the company moves towards achieving its new vision. 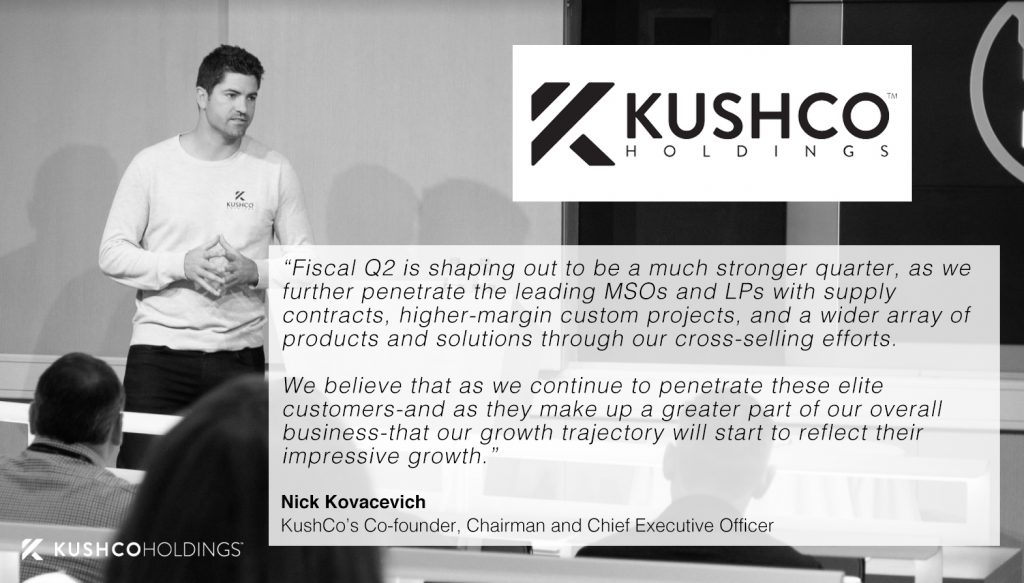 Get up to speed by visiting the KushCo Holdings Investor Dashboard that we maintain on their behalf as a client of New Cannabis Ventures. Click the blue Follow Company button in order to stay up to date with their progress.

New Cannabis Ventures publishes curated articles as well as exclusive news. Here is some of the most interesting business content from this week:

Get ahead of the crowd! If you are a cannabis investor and find value in our Sunday newsletters, subscribe to 420 Investor, Alan’s comprehensive stock due diligence platform since 2013. Gain immediate access to real-time and in-depth information and market intelligence about the publicly traded cannabis sector, including daily videos, weekly chats, model portfolios, a community forum and much more.

Use the suite of professionally managed NCV Cannabis Stock Indices to monitor the performance of publicly-traded cannabis companies within the day or over longer time-frames. In addition to the comprehensive Global Cannabis Stock Index, we offer a family of indices to track Canadian licensed producers as well as the American Cannabis Operator Index.

Stay on top of some of the most important communications from public companies by viewing upcoming cannabis investor earnings conference calls.

Based in Houston, Alan leverages his experience as founder of online communities 420 Investor, the first and still largest due diligence platform focused on the publicly-traded stocks in the cannabis industry. With his extensive network in the cannabis community, Alan continues to find new ways to connect the industry and facilitate its sustainable growth. At New Cannabis Ventures, he is responsible for content development and strategic alliances. Before shifting his focus to the cannabis industry in early 2013, Alan, who began his career on Wall Street in 1986, worked as an independent research analyst following over two decades in research and portfolio management. A prolific writer, with over 650 articles published since 2007 at Seeking Alpha, where he has 70,000 followers, Alan is a frequent speaker at industry conferences and a frequent source to the media, including the NY Times, the Wall Street Journal, Fox Business, and Bloomberg TV. Contact Alan: Twitter | Facebook | LinkedIn | Email