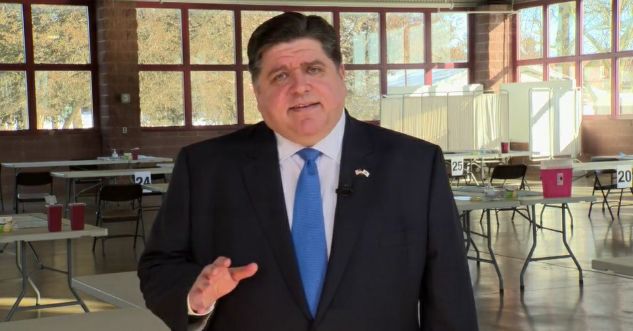 Pritzker made good on his campaign promise to fully legalize cannabis statewide, but the launch of Illinois’ recreational marijuana program has been dogged by an ongoing licensing imbroglio. All the state’s pending cannabis licenses have been delayed indefinitely following outcry and lawsuits from jilted social equity applicants, who were supposed to get a leg up in the application process in an effort to diversify the state’s white-dominated cannabis industry.

State senators approved legislation during last month’s lame duck session that aimed to resolve the issue by doubling the number of new dispensary licenses and creating a second lottery to determine the winners, but their counterparts in the House failed to call it for a vote. On Wednesday, Pritzker signaled that accomplishing that goal remains front of mind.

“The to-do list is long, but it includes key priorities like finally authorizing the overdue second cannabis licensing lottery, and passing an energy bill that protects our nuclear fleet and builds up our wind and solar industries, protects the environment, puts consumers first and supports jobs,” Pritzker said.

Social equity advocates who have teamed with lawmakers to devise a legislative fix said they were encouraged by the governor’s comments. Edie Moore, the executive director of the Chicago chapter of the National Organization for the Reform of Marijuana Laws, noted that her organization and other stakeholders “have been working very diligently for long hours along with the industry to ensure the speedy resolution to this issue.

“We’re glad it’s a top priority for the governor. It certainly is for us,” said Moore, who is partnered in two startups that already qualified for the long-delayed lottery to determine the winners of the 75 pending dispensary licenses.

Rickey Hendon, a former state senator whose application group fell short of the perfect scores needed to join the first lottery and has criticized the governor on the issue, lauded Pritzker’s recent comments on cannabis licensing. However, Hendon noted that members of his team are still taking a “wait and see approach” as the new legislation comes into focus and the state moves forward with a process that could expand the pool of applicants included in the initial lottery.

“I just hope he don’t break our hearts again in a few weeks when the final bills pass,” Hendon said of Pritzker. “I’d hate being made to look like a fool.”

Hendon touted a tentative plan for creating a second lottery that he helped devise with state Rep. La Shawn Ford, a Chicago Democrat who has also been critical of the state’s licensing efforts.

It’s still unclear what exactly will wind up being introduced, noted Ford, who has also been working on a sweeping legislative plan with Moore’s organization, other social equity groups and fellow lawmakers.

That proposal tentatively includes a planned bill that would create a second lottery to issue 75 additional dispensary permits to existing applicant groups that meet a lower scoring threshold than the perfect marks needed to qualify for the first lottery. Other related proposals mentioned in a document obtained by the Sun-Times would increase the number of outstanding craft cultivation licenses from 40 to 60, use cannabis revenues to reimburse applicants affected by the ongoing licensing delays and allow existing dispensaries to relocate — an issue that has previously upended negotiations in Springfield.

Ford said the ultimate goal is to work with social equity applicants and advocates to formulate an “agreed plan.”